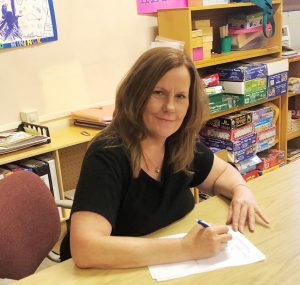 Kathi Johnson first became aware of the Head Start program during the summer of 2000 when an employee of Head Start placed a flyer in her storm door. In August 2000, she completed an application and enrolled Shayna, her daughter, into Westmoreland Community Action’s home-based Head Start program. The purpose was to get Shayna into a pre-school program in order to help her become socialized with other children her age. Kathi was involved in Shayna’s education and the program by attending field trips and participating in socialization events at the Head Start center once a month. Kathi also received weekly visits at her home in West Newton from her first Home Visitor, Nancy Green. Visits went very well but Kathi decided to move to the City of Jeannette.

A new Home Visitor, Elizabeth Clark, was assigned to support Kathi and Shayna. According to Kathi, Elizabeth saved her from self-destruction. A center-based spot opened up for Shayna in the Jeannette Head Start center and she began her enrollment on September 11, 2001. Ironically, while America was attacked by terrorism, Kathi’s own world began to crumble under her feet. Her husband began an extra-marital affair and then subsequently took her children from her. Kathi, without critical coping skills at this time and distraught because she did not have her children with her, became suicidal and homicidal towards her husband. With the help of her Home Visitor, Elizabeth, she admitted herself into the Westmoreland Hospital Mental Health Unit on a 72-hour (302) commitment. Elizabeth kept in constant contact with Kathi and helped her out of this stressful situation by visiting her and maintaining verbal communication through phone contact. Needless to say, Kathi was in mental and emotional distress and was financially stressed as well. At this point Kathi took a two-week break to sort her life out with the help of Elizabeth. Her children were returned to her and a plan for the children was developed.

In November 2001, Kathi realized that she needed to leave this situation so she moved again, this time to Youngwood where she and her children stayed with a co-worker for four months. There was no spot for Shayna in the local Head Start Center so Kathi enrolled her in the home-based option and welcomed weekly visits by a new Home Visitor, Lynne Golembiewski. Lynne had wonderful advice for Kathi that worked for her and helped her become stronger as a parent, both mentally and financially. Lynne was there for her during this transition period of Kathi’s life. Kathi felt that there was a natural connection with Lynne and she always looked forward to her weekly visits. An opening eventually became available and Shayna returned to the center-based option; Lynne now visited Kathi and Shayna on a monthly basis. Lynne states, “Kathi was always cooperative with home visits and never cancelled with me. She was always involved with her children, especially with their education and development.” Shayna completed the Head Start Program in May 2002.

In July 2002, Kathi moved to Belle Vernon where her youngest daughter, Jami, started in the Mon Valley Head Start home-based program. She eventually enrolled in the center-based program in the fall of 2003 where they met their new Home Visitor, Donna Deluca. Kathi at this point was starting to get on her feet financially and found love again with her current husband, Scott. Kathi considered herself stable at this point as far as having a safe, comfortable, and stable home for her daughters. Donna inspired Kathi to become a registered voter and encouraged her to volunteer at the Mon Valley Head Start center where Kathi volunteered four hours a week. She would help out at presentations and would attend every parent meeting. Kathi, being interested in everything Head Start, invested more and more time with the program and became a member of the Policy Council in September of 2003 where she found her voice and came out of her shell. Jami completed the Head Start program in May of 2004.

Kathi, having seen how much help Head Start can be, not only for her children but for herself, felt it was time to formally give back to the program. She applied for a job in Head Start and was hired as a substitute classroom aide in the Mon Valley and Jeannette Head Start Centers. When a Classroom Aide position opened in the Mon Valley center she applied and got the job. Kathi remained in that position until February 2005, and with the encouragement of Patty Berkey who helped her complete an in-house application, she applied and secured the Home Visitor position for the Mon Valley Head Start Center. Patty says, “I was the training coordinator at the time and I saw potential in Kathi. As a former Head Start parent she was clearly an excellent role model for other parents so I encouraged her to apply to be a Home Visitor.”

Kathi and her family moved to Ruffs Dale (her current residence) in November of 2005 and she remained the Mon Valley Home Visitor until she transferred to the Mount Pleasant Head Start center in August 2006, which was closer to home. Kathi continued with this job until June of 2009 where she became a transportation aide for the agency. In November 2009 she became a Center Support Staff. In August 2016 Kathi became a Family Service Worker, gaining even more responsibilities of juggling a home visiting schedule, assisting in the classroom, running parent meetings, planning family activities, and tracking attendance. Kathi is currently a Family Advocate with the support of her supervisor, Family and Community Partnership Coordinator, Bill Vigliotti. Kathi goes the extra mile and goes above and beyond to assist the families that she works with because she enjoys being a mentor and providing support to families. It is her dream to continue up the ladder and advance within the agency. Kathi says, “Throughout my involvement with Westmoreland Community Action Head Start I have been driven to succeed and always wanted my children to have a normal, successful life where they can reach their goals. I was given power, confidence, and support. It made me a better parent and a leader.” 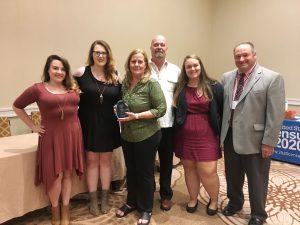 Kathi has participated in numerous trainings through her employment with Westmoreland Community Action (WCA) and has kept her Child Development Associate degree current, completed her Family Development Credential for Strength-Based Family Worker and kept it current, and has taken 30 college credits through Westmoreland County Community College with the help of WCA. Kathi has participated in community involvement serving as PTA Vice President for two years, color guard representative for the local high school band for four years, and Assistant Leader for Daisies/Brownies for three years.

She is married to her husband, Scott, and they have three successful daughters. The eldest, her step-daughter, Heather, 23, whom she raised since she was four years old, currently works as a Therapeutic Support Staff and is attending graduate school at Pitt studying Psychology. Shayna, 22, is a college student studying Social Work and Human Services. And Jami, 20, works as an Emergency Vet Tech for Pittsburgh Veterinary Specialty and Emergency Center. Kathi has instilled in all of them the importance of volunteering and providing assistance, as they all frequently help at WCA’s Head Start center. They reside in a single-family home in the community of Ruffs Dale where Kathi enjoys gardening, canning, walking her dogs, and Facebooking. The family is happy and living out their dreams with the help of Westmoreland Community Action. Kathi has been involved with WCA for 19 years and has been employed with the agency for the past 15 years. She has proven that she can overcome obstacles and barriers that are standing in her way and be self-sufficient.